Scott Lenhardt is best known for his work with Burton Snowboards, having created some of their most iconic artwork since the early nineties.

Scott Lenhardt from West Rupert, Vermont is probably best known for his extensive work with Vermont based Burton Snowboards, having created some of their most iconic and memorable artwork since the early nineties. Some might remember Lenhardts graphic from a certain Ross Powers-promodel from the mid nineties, others might have encountered his work in Vice Magazine. He has also done commercial work for Nike, Adidas and Red Bull, as well as several solo exhibitions. "ETHOS" Art Exhibition
The attitude of freewill and self-expression that snowboarding embraces has shaped and influenced a genre of art and a thriving subculture of its own. Personal expression has set the tone for a wide variety of styles and artistic interpretations of the lifestyle.

Our first movement is to host the “Ethos” exhibition on June 16th at Revir Galleri in Oslo, Norway.

Artist and Curator Peter-John de Villiers has assembled a group of key artists that represent a wide spectrum within the genre. These seven creatives have had an impact on the visual aesthetic we see in snowboarding today.

Exhibition After Party will be at John Dee with Norwegian Punk band LAARHÖNE and special guests! 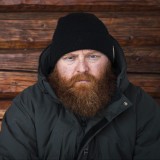